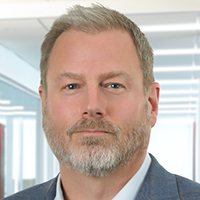 Randy White joined ECRI in 2019 as chief legal officer. He serves as a member of ECRI’s Executive Committee and is also ECRI’s chief privacy officer. Overseeing ECRI’s legal department and outside counsel, Randy is responsible for all of ECRI’s legal affairs in the United States, Europe, and Asia Pacific.

Prior to his current role, Randy spent twenty years as a partner at Fox Rothschild LLP, a nationwide Am Law 100 firm. A partner in Fox’s litigation and labor and employment departments, Randy advised and litigated on behalf of executives, directors, and publicly and privately held companies across the country. At Fox, Randy also served as outside general counsel for nonprofits, start-ups, and middle market companies, overseeing transaction and litigation teams.

Randy holds a juris doctor with honors from the Dickinson School of Law and a bachelor’s degree in government from St. Lawrence University. He is a member of the bars of the Commonwealths of Massachusetts and Pennsylvania, and has been admitted to practice before numerous federal courts.